Buying chamois cream can be an awkward experience for any cyclist. This is the same whether an absolute beginner to a seasoned campaigner. No one wants to talk about their private areas. Especially not with a store assistant. However, if you’re planning on riding for any reasonable distance, you’re going to need some to help protect you from any discomfort. This is an article to help you choose the best chamois cream for your needs and budget. If you know what you want, you don’t need to spend any longer thinking about which to buy than is absolutely necessary.

What is Chamois Cream?

Chamois cream is a generic term for any number of salves and balms designed to reduce friction, aid protection and prevent any rubbing between your seat and your bike seat. Without chamois cream you stand to rub your skin against your bike seat for large periods of time. Potentially this will rub away at the skin. The result is skin sores or discomfort where you want it least. Chamois cream can be applied to the skin, the inner padding of your cycling shorts, or to the seat itself. You can even apply it to all three. Using it should prevent any injury or discomfort from happening on your ride.

What to consider before buying

There are always a few factors to consider when buying a new kind of chamois cream that you haven’t tried before. First is the price – chamois cream is understandably not perhaps what you would prefer to spend too much of your hard earned cash on. However it can be a life saver on a long ride. Consider how much you feel you need protecting, and how much you’re willing to pay. Secondly, different creams provide different effects – some cool and some tingle. Finally, most creams are scented. Don’t purchase a cream with a scent that you cannot stand, or your ride will be just as uncomfortable as if you hadn’t put on any cream at all. Think about these factors as you choose the best chamois cream for you.

The Udderly Smooth cream with Shea Butter is one of the thicker creams on this list. Due to the addition of Shea Butter, this cream has a very thick texture, which while adding comfort and smoothness, may seem too heavy for certain skin types. It is not a strongly scented cream though, with many reviewers noting that they could barely smell anything. The cream was not reported as having caused any discolouration to coloured shorts, and its pale colour apparently quickly turns clear. Users were united on the cream’s effectiveness at preventing any chafing or soreness, and were impressed at the long lasting effects of the cream, especially for the low price of less than £10.

The only frequent complaint was that the cream felt cold on the skin, particularly on initial application. However, for most, this quickly faded. 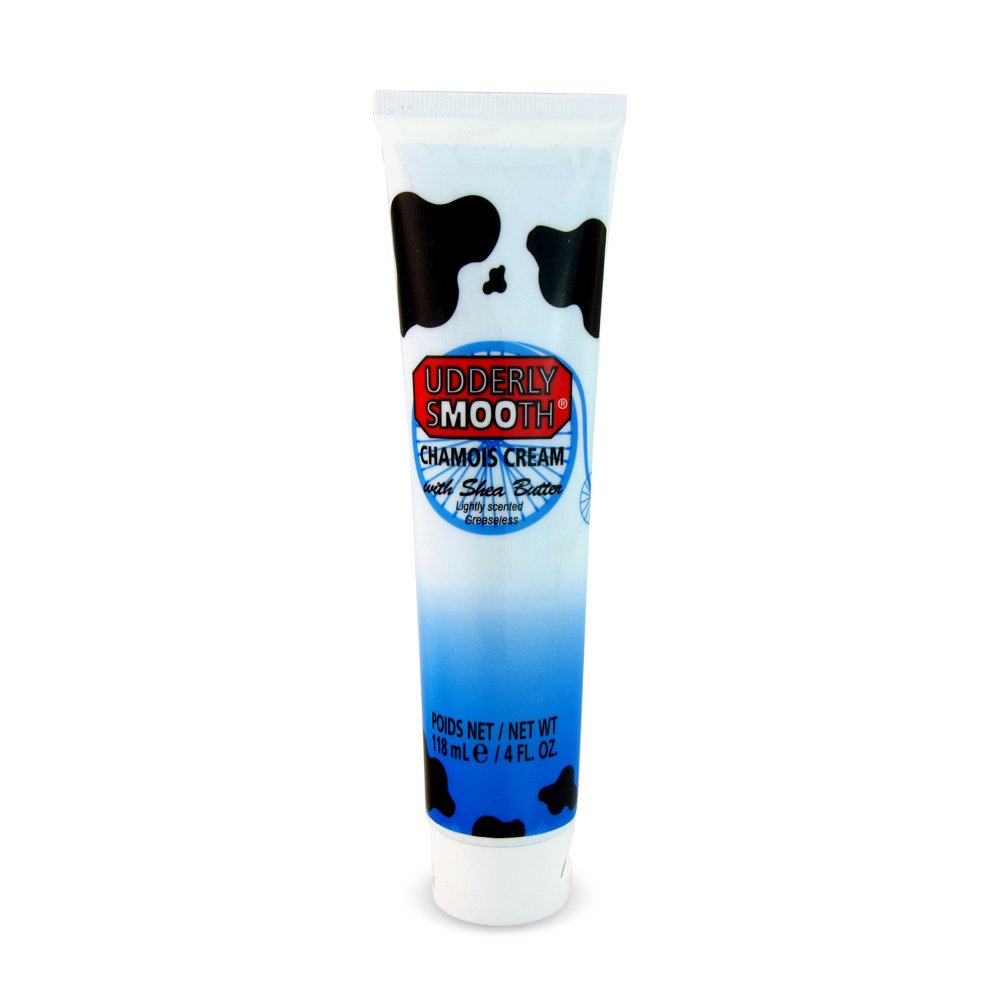 This is a second product on the list from Udderly Smooth, and is specifically marketed at cyclists. The cream comes in a smaller tube, rather than a large tub, making it portable. It is suitable to take on long rides to top up on cream. Udderly Smooth has the same anti chafing properties as its larger cousin, although reviewers note that it has a thinner texture and consistency. It is described as being effective for between 4 and 6 hours, and reviewers testify that this is approximately correct, depending on the quantity applied.

The cream is non staining, and lightly scented, with a pale pearlescent colour. Reviewers were impressed with the cream’s effectiveness, particularly in heat and humid conditions. At less than £6 a tube, this is an excellent budget or portable option to take with you on long rides.

This Chamois Butt’r cream is, despite the name, a serious product. While marketed to cyclists, the cream would work equally well with all kinds of strenuous activities, such as jogging and horse riding. It is much thinner than the previous two creams on the list. It sits more on top of the skin than soaking into it.

Reviewers describe it as an effective lubricant for the surface of both the skin and the inside of the shorts or the top of the seat. This cream stops the potentially rubbing surfaces from producing friction, rather than softening one or the other. At around £15, this cream is one of the more expensive on the list, especially as it comes in a smallish tube, although reviewers do largely note its effectiveness. One frequent complaint was that the cream had to be washed off with effort, rather than simply fading away.

The Assos Chamois Cream is a mid priced cream, aimed at cyclists. While many of the other creams on this list specifically try not to cause any tingling sensation, this cream is lightly mentholated, which means that it causes a sense of cooling and tingling in the areas it has been applied to. Reviewers compared the feeling to that of Deep Heat, although this was not meant as a criticism – indeed many found it refreshing after they had got used to it. Reviewers noted that this cream is very effective at preventing chafing and rubbing. It also keeps the skin supple and undamaged. It has a very thick texture, meaning it requires some rubbing into the desired areas to be most effective. Despite the initially odd feeling of tingling, reviewers were generally united that this was an excellent mid range chamois cream.

This is the only cream on this list to be made from 100% natural ingredients. This is important in not just helping to save the planet, but in protecting and working with sensitive skin. For many people, chemicals in creams can be harsh on their skin. Ultra Bee’s cream is made from honey, Calendula and Propolis, making it suitable for all types on sensitive skin. By using honey, this cream takes advantage of its natural anti-bacterial properties, as well as its hydrophobic nature. This cream has been described by reviewers as being excellent at preventing friction and rubbing, even for hundreds of miles. However, some reviewers complained that the cream was overly greasy feeling on the skin. If this is a sacrifice you are willing to make to ensure that your cream is nature friendly, then this may be the cream for you.

The Muc-Off Chamois Cream is the most expensive on the list, although it is near universally praised by reviewers. At around £17 for 250ml, this ought to be the most effective cream on the list – a crown fiercely contested. However, this is a high quality cream at a high price. It is free from parabens and formaldehyde, meaning that this is a skin friendly cream. This cream is a combination of moisturiser and lubricant. This means that it both prevents chafing and rubbing between your skin and your equipment, and at the same time softening and smoothing your skin. This is a lightly scented cream, which may put off some. However, reviewers are united in describing it as a high quality, well working cream.

How was Chamois Cream Invented?

Padding inserts inside shorts, or covers for bike seats were made of the leather very frequently. However, chamois leather has a tendency to become much stiffer and harder than it initially seems, particularly after getting wet. This meant that the pads became tough and uncomfortable after being washed a few times. For cyclists on long rides, this meant that the padding which was meant to protect them was in fact hurting their skin. This made the fear of rain and sweat even worse than usual – no one wants to be injured down there. The additional wetness could make the leather even tougher.

Chamois cream was invented to rub onto the chamois leather in between rides. This softens the leather and make it more comfortable for the rider. Cyclists stopped using chamois leather for padding and moved to synthetics. As a result, the creams became more to protect the skin itself rather than the leather, although the name chamois stuck.

Chamois cream is a lesser known necessity for all cyclists who plan on taking any long rides. It is not often thought of as being particularly useful for amateur cyclists. However, it is essential to maintain proper care of your skin, and to prevent chafing and rubbing of the areas you want least to injure. There are options on this list for all requirements. For someone who needs a budget or portable option, consider the Udderly Smooth tube. For the eco-conscious or skin sensitive option, try the Ultra Bee cream. Finally, for someone who is willing to pay a little more to get what they want, try the Muc-Off Chamois cream for a luxury option. When buying the best chamois cream for you, always choose based on what you need, and what’s best for you. Then you will always make the right choice.