Every year the darker nights and evenings start, and every year they seem to come by surprise. How did it get so dark, and how did it get so dark so early? Perhaps you’ve taken your bike out for a ride in the late afternoon or evening, and suddenly it is dark all around you. Cars, pedestrians and other cyclists need to see you, and you need to see them. You need lights for your bike, but where to start? This is an article to help you find the best rear bike light for you and your needs.

Why Use Bike Lights?

Bike lights are a necessity for riding at lower light levels. They are extremely valuable in ensuring both your own safety, and in ensuring that no one else around you has an accident from not seeing you. There are two kinds of bike lights – front and rear. Front lights tend to be brighter, and are white (as in a car). The front lights keep the road in front of you lit up, and ensure that people can see you coming. Rear lights are red, are usually of a lower brightness, and allow people behind you to see you as you ride. Both are equally valuable, but this article will focus on the best rear bike lights.

What to Consider Before Buying

There are a few important factors to consider when purchasing bike lights. First of these is how bright they are. Brightness is measured in lumens, and the higher the number the better. If you are planning on riding somewhere without street lights or other background lights, you will need a brighter light. All bike lights are powered by batteries, some charged by USB cables, some by disposable batteries – consider which is better for you, and whether you have time to recharge your bike light frequently. Finally, you need to think about what kind of attachment the light has, and how it will connect to your bike. This is called the bike mount, and it needs to be suitable for you bike. 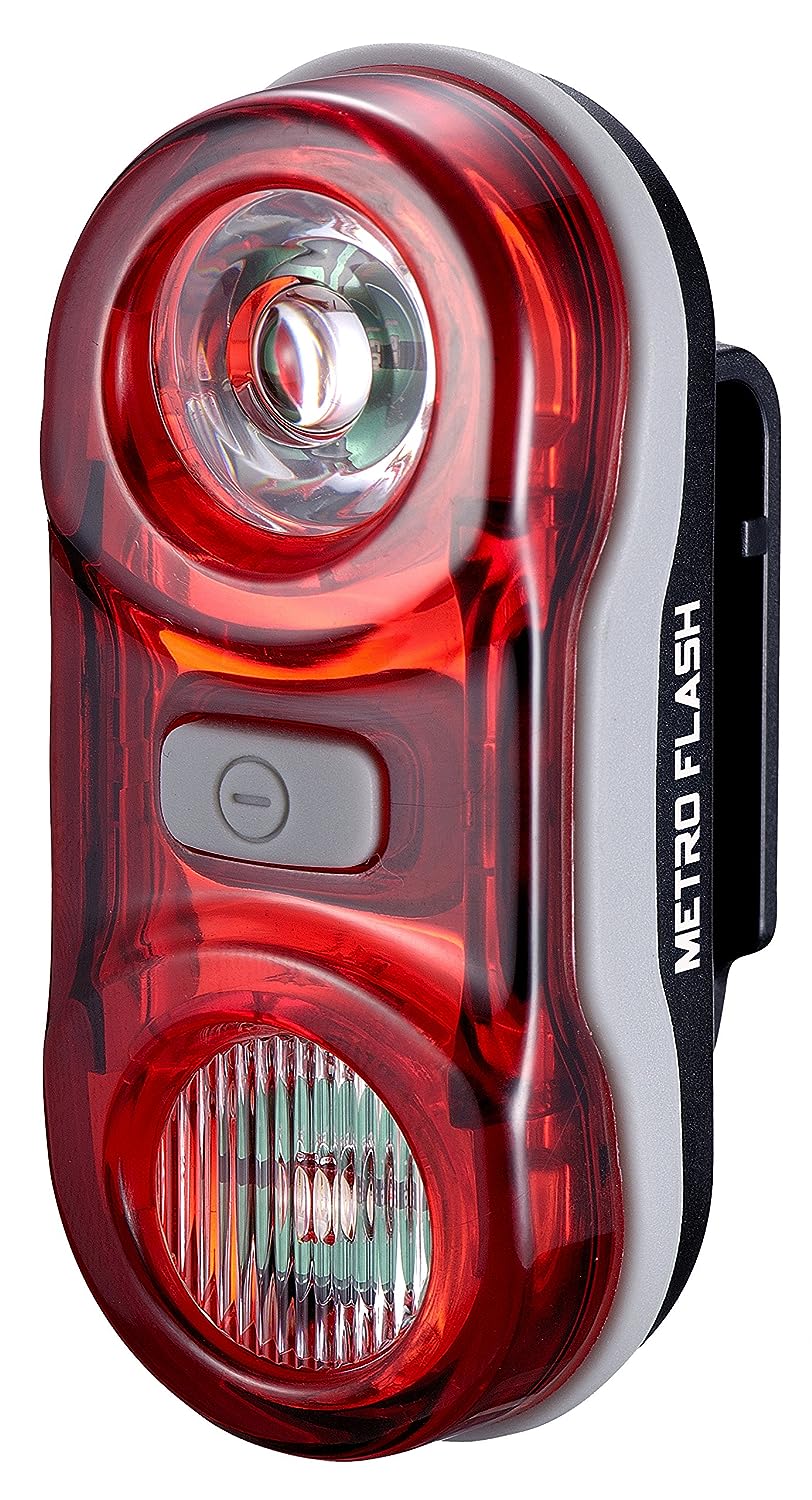 This is a rear light noted by many for its brightness. Several reviewers noted that this rear light had a particularly strong light, and that the three different modes of lights offered are all useful in different situations. As this light is especially bright, it might be best suited for cyclists who intend on riding in dark places, such as the countryside, or other places without street lights.

The light is designed to clip onto anything – including backpacks and your person, rather than just your bike. Reviewers noted that while this feature was versatile, it was perhaps not as well carried out as it could be. Some people noted that sometimes there was a slight problem with how well the clamp kept hold of whatever it was attached to. However, this is a medium priced light, at around £10 to £15, so should be considered a great medium budget option.

This rear bike light is considered to be one of the brightest on the market – although perhaps at the expense of build quality. Multiple reviewers were surprised at the power that this rear light could produce, and were impressed with the different light options provided. However, many of them were also disappointed in the build quality of the light, describing it as plastic-like, and liable to break if knocked. These are disposable battery powered lights, and are advertised as lasting for approximately 40 hours on each pair of batteries. This is a relatively short period of time, as the MetroFlash lights also run on disposables and are said to last three times as long. This is perhaps a set of lights to consider for a budget – but not for someone looking for a long lasting light.

This is a rear bike light with an excellent build quality. Reviewers were near unanimous in praising the high quality of its construction. The light is built from sturdy rubber and plastic. It is said to stand up to any kind of knock it might be expected to take. The light comes with a variety of sizes of connectors, allowing it to attach easily to either a bike or a helmet. Reviewers on amazon find them easy to use. It is also a bright light, providing 100 lumens worth of power, and 6 different settings. Unlike the previous two lights, this is a USB charged light, and as such has a much shorter power expectancy of only 4-12 hours. However, it is fully charged in only 2 hours through a USB cable that reviewers note is of excellent quality.

The Beeway Bicycle Tail Light Set is – as the name would suggest – not one, but two rear lights. This provides double the potential safety lighting of the previously mentioned lights. They are connected to the bike, or anything else, through silicon straps. Reviewers describe these as being easy to use, and hard wearing. The lights are charged through a USB cable. This is a mini USB, rather than the more common micro USB. They are a medium bright pair of lights, although when doubled up they offer much the same brightness as some of the more powerful lights. They are also an excellent budget option at around £10-15 for two.

The Smart Three LED Rear Lights are a classic example of a budget set of lights. They are currently on sale for around £6, which makes them an excellent option for those on a very tight budget. However, they are, as is perhaps expected with a set of lights so cheap, not the best quality on this list. They run on regular disposable batteries, although not for particularly long. Reviewers also noted that they are fit with an one size fits all clamp. This attaches well initially, but some people note it can come undone easily. It is not recommended as a permanent attachment.

This light is advertised as working up to a range of 600m with 3 different options of brightness, although reviewers note that they are limited in their long range effectiveness. They are, however, very cheap. If you are looking for a low cost light, perhaps to use in well lit areas, these are an excellent option. 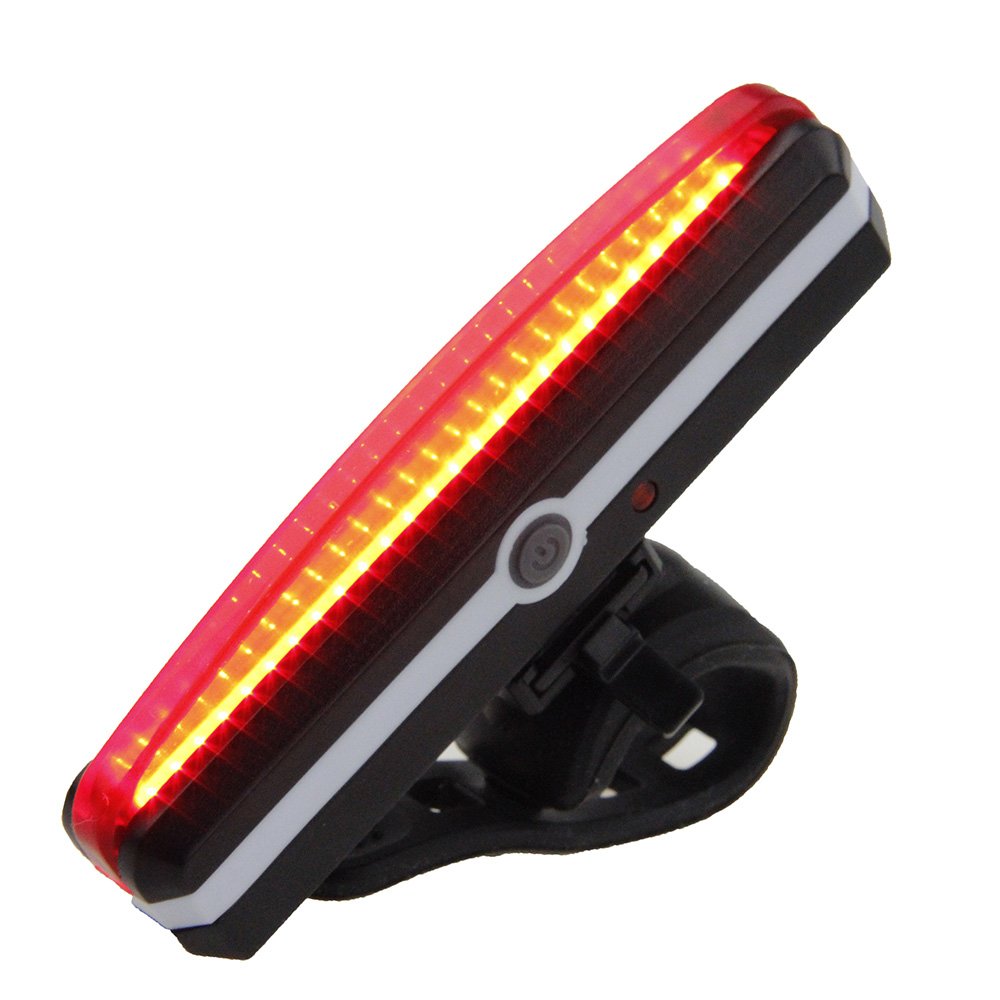 This is a light described by many of its reviewers as being bright, lightweight and easy to use. It is attached to the bike, or anything else, with a sturdy rubberised strap. The strap fits a variety of tube sizes and comes free easily with a release button. This avoids many of the problems of the other light attachment methods, as it is easily adjustable. This is a medium-bright light, with 6 different options of brightness / flash. However, the off switch can be a little tricky. Many users note that turning the light off requires skill and practice. This is perhaps a minor complaint, along with the other frequent complaint that the usb charging socket cover is difficult to access. At around £10, this is a mid range light and would be an excellent choice for the city based cyclist.

Many reviewers were surprised at the quality of this light in comparison to its low price. Indeed, this is a low priced rear light, at around £10. Reviewers noted that the light had an excellent brightness in a variety of weathers. It stands up well to dampness and rain. The light has 6 options of brightness and flash. Its on/off switch is noted as being superior to many others on this list. The construction is described by several reviewers as being sturdy and resistant to knocks. The light itself is rather on the small side. It is a USB charged light, and is capable of running for up to 13 hours on 2 hours worth of charging. This is perhaps the best option for cyclists based in cities or other well lit areas, due to its brightness but small size.

This is the smallest and cheapest option on the list but is perhaps slightly misleading in its naming. It is described as a rear light. While it could certainly be used as such, it would possibly be better named as a helmet light. This is a very physically small light and may not produce enough light to be safe as an exclusive rear light on a bike. As a cycle helmet light or temporary option, however, it would be an excellent choice.

Despite the above warning, the Phoenix is described by many reviewers as being particularly bright for its size. It is even bright even during the day. Many reviewers noted its sturdy build quality and reasonable water resistance. Indeed, due to its performance and low cost, several reviewers said that they had bought several of these lights to festoon their bike with. This may be the best option for this light if you intend on using it as a cycle rather than a helmet light.

Hopefully in this article you will have found the most suitable set of rear lights for your needs. What is most important in choosing rear lights, as with any cycle part, is how they fit into your particular requirements. If you live somewhere well lit, such as a city centre, you might not need the same amount of brightness. A smaller size might be better suited here than if you lived in the darker countryside. If your bike needs only a small and powerful light, perhaps try the GreenClick COB light. However, if you really need to light up your way and be seen from a distance, perhaps try the Apace Vision USB light. Choose the lights that best suit your needs. Whether that refers to budget or build quality is down to you. You will be sure to find the best rear cycle light for you.